Earlier this week, Bihar Police arrested three people, including a retired police officer from Jharkhand, all of whom were allegedly linked to a potential terror module with supposed links to extremist outfit Popular Front India (PFI), for indulging in ‘anti-India’ activities. During the arrest in Patna, the police unearthed an eight-page document that revealed a plot to establish an “Islamic government” in India by the 100th anniversary of the country’s independence.

The document titled ‘India 2047- Towards rule of Islam in India’ was recovered on Wednesday, during a raid and subsequent arrest of two accused from Phulwari Sharif area in Patna. The duo arrested retired Jharkhand police officer Mohammad Jallauddin, and Athar Parvez, a former member of the now banned organisation Students’ Islamic Movement of India (SIMI), and currently a member of the PFI and the Social Democratic Party of India (SDPI).

According to Assistant Superintendent of Police (ASP) Manish Kumar, police officials had been on high alert given Prime Minister Narendra Modi’s visit to Deoghar and Patna on July 12. “We keep an eye on such institutions on routine work… in the meantime, we came to know about these people’s office and started investigating it closely,” he said. This investigation led to the registration of a FIR against 26 people, out of whom, three have been arrested.

“Two indulging in anti-India activities were arrested. For the past two months, the accused had people from other states coming in. Those coming were changing their names while booking tickets and while staying in hotels,” said ASP Kumar. He shared that Parvez’s younger brother went to jail in connection with 2001-02 bomb blasts in the state after SIMI was banned.

The ASP  also indicated that Parvez raised funds in lakhs, instigated others toward religious violence, and taught locals to use knives and swords under the guise of learning martial arts. Reportedly,  the police also have CCTV footage and eyewitness accounts supporting these claims. “Parvez also raised funds in lakhs, the ED is being involved for the same,” indicated ASP Kumar.

Reportedly, excerpts from the eight-page document shared by the accused state that the PFI is confident that even if 10 percent of the total Muslim population in India rallied behind it, the organisation would “subjugate the majority community to their knees and bring back the glory of Islam in India”. Furthermore, the internal document marked ‘Not for circulation’, also mentioned, “To achieve this goal, this roadmap has been prepared to be kept in mind by all the PFI leaders and accordingly guide the PFI cadres, in particular and Muslim community, in general towards this goal.” 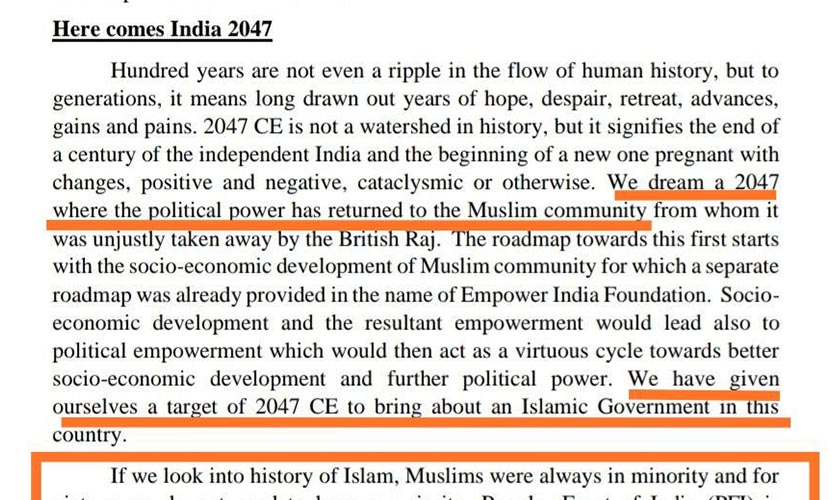 “All our frontal organisations including the party should be focused on expanding and recruiting new members. We would begin to recruit and train members into our PE department wherein they should be given training on attacking and defensive techniques, use of swords, rods, and other weapons,” read the PFI document. Reportedly, the document also outlined plans for recruiting “loyal Muslims” into different branches of governments, including the executive and judicial positions, the police and the Indian Army.

According to the document, the PFI plans to “create a split” between the Rashtriya Swayamsevak Sangh (RSS) and SCs/STs/OBCs, by projecting the organisation as one that is only interested in the welfare of “upper caste Hindus”. Furthermore, the document, reportedly, stated that those against their interest will be “eliminated”, and the PE cadres would act as a “safeguard” against the influence of security forces of their opponents.

The eight-page document also outlines actionable points, which include the “establishment of grievances”, mass mobilisation, inclusiveness, outreach and engagement, a PFI in every house, recruitment and training of members, and the collection of information against Sangh/Parivar leaders. “We dream of 2047, where political power has returned to the Muslim community from whom it was unjustly taken away by the British Raj,” the document reportedly stated.

The papers have also indicated that in the event of a “full-fledged showdown” with the state, in addition to the PE cadres, they would need help from “friendly Islamic nations”. “In the last few years, PFI has developed a friendly relationship with Turkey, a flagbearer of Islam. Efforts are on to cultivate reliable friendship in some other Islamic countries,” stated the document.

Meanwhile, the PFI has dismissed these allegations asserting that the people arrested are not a part of the organisation, “We reject all the claims by the Bihar Police. Two people who are arrested are not members of the PFI,” said PFI general secretary Anis Ahmed. On Thursday, Ahmed also took to Twitter and said, “Bihar Police claims that just few days before PM’s visit PFI was conducting terror training and the Police came to know about it one day after the PM programme. This is a self goal and enough to prove the fabricated story to target PFI.”

Reportedly, the PM’s programme was the supposed target, but those involved could not execute the attack due to the agencies already being on high alert. Subsequently, Bihar BJP president Sanjay Jaiswal has called for a thorough investigation into the matter.