In a complaint to Vasai police two years ago, Shraddha Walkar, who was allegedly strangled by her boyfriend Aftab Poonawalla, had feared exactly that, as per investigators’ latest revelations.

In a new development, it has been revealed that Walkar had reportedly filed a complaint with the Vasai police in Maharashtra two years ago, in 2020, in which she communicated her fear that her boyfriend Aftab would strangle her, cut her up, and dump her body in a jungle.

Reportedly, according to police sources, she complained after Aftab beat her up in their shared flat, saying that his family knew about his violent behaviour. Currently, the police are investigating this complaint and determining what action the Vasai police took following it. Her father and her coworker Karan, whom she had told about the assault, are in Delhi to record their statements.

Around the same time in 2020, Shraddha had shared a picture of her bruised face with Karan over WhatsApp, which corresponds with the letter she wrote on November 23 that year. She was taken to the hospital the following week with “internal injuries”.

“Today he tried to kill me by suffocating me and he scares me and blackmails me that he will kill me, cut me up in pieces and throw me away. It’s been six months he has been hitting me but I did not have the guts to go to the police because he would threaten to kill me,” mentioned the letter.

The letter states, “His parents are aware that he beats me and that he tried to kill me. They also know about us living together and they visit on weekends.” It further says that she lived with him “as we were supposed to get married anytime soon and had the blessings of his family”. It concludes, however, with the following: “Henceforth I’m not willing to live with him, so any kind of physical damage should be considered coming from him as he has been blackmailing me to kill me or hurt me whenever he sees me anywhere.”

In spite of the assault allegations mentioned in the 2020 complaint, and the accusation that Aftab “blackmailed” her “for six months” with murder threats, the couple didn’t break up. They both worked in call centres and moved to Delhi in May. Shraddha was not in touch with her parents as they disapproved of the inter-faith relationship. In September, her father went to the police after her friends told him that she hadn’t contacted them in months after they moved into a flat in Mehrauli, Delhi. Over a month after, Delhi Police found that she had been missing for months, and subsequently, the gruesome murder was discovered.

Uncertain of how long they were away, if ever, the couple supposedly took a trip to Himachal Pradesh earlier this year, before relocating to Delhi. The police currently have an alleged confession, which is inadmissible on its own as proof of murder. In particular, the forensic examination to determine that the severed limbs and other body parts discovered in the Mehrauli bushes and the jungle are truly hers, is one of the tangible clues that the police are counting on. Additionally, the findings from Aftab’s polygraph test scheduled today and the narco test expected to take place later this week will potentially prove defining in helping the police make their case.

Read more: What We Know So Far About The Shraddha Walker Murder Case 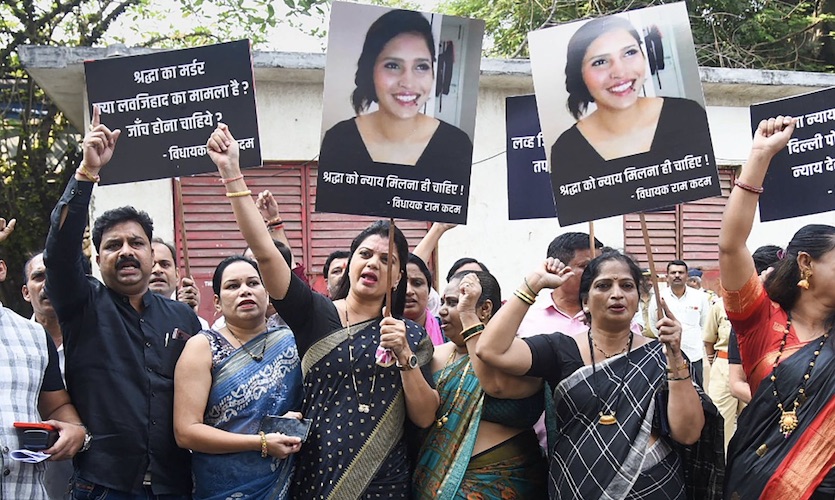 Shraddha Walker Murder Case: What We Know So Far