As per a report by the EurAsian Times, the Pakistan Army is using China-made CH-4B combat drones to crush the rebellion in Balochistan. While it has been using fighter jets and armed helicopters against the Baloch rebels for several years, the use of combat unmanned aerial vehicles (UAVs) is relatively new.

According to the Balochistan Post, Pakistan deployed UAVs, fighter jets, and Gunship helicopters, along with SSG Commandos, earlier this month in Bolan, to fight Baloch rebels. Pakistani military operations were resisted by the Baloch militia, leading to the death of two SSG Commandos. It is estimated that a number of Pakistani commandos were killed by the rebels, but the EurAsian Times could not independently verify the number.

Pakistani forces have mainly used fighter jets and armed helicopters against Baloch rebels since they began using combat UAVs several years ago. The Balochistan Post reports that China and Turkey have supplied Pakistan with various models of combat UAVs. According to Twitter and some Pakistani defence blogs, several Chinese CH-4B UAVs have been spotted over Bolan, where the two SSG Commandos were reportedly killed by the Baloch rebels. As a result of recent armed assaults against them, the Pakistani military has been accused of exaggerating its aggression.

The Balochistan Post recently reported that the Human Rights Council of Balochistan received 41 cases of enforced disappearances, and thirty cases of extrajudicial executions during October 2022. A total of five Cai Hong 4 (Rainbow 4, or CH-4) multirole medium-altitude long-endurance (MALE) unmanned aerial vehicles (UAVs) were provided by China to Pakistan, in January 2021. Islamabad acquired a variant of the CH-4 drone that was kept secret at the time. However, it was later reported to be the CH-4B variant.

According to reports, the Pakistani military is assisted in operating CH-4 drones by a Chinese People’s Liberation Army (PLA) detachment located in Pasni, Gwadar. PNS Makran, a naval air station operated by the Pakistani military, is located at Pasni. The Gwadar Port is being developed by China under the China-Pakistan Economic Agreement (CPEC), which paves the way for China to deploy troops in the area. Chinese companies manage foreign ports with terminals in strategic locations, with the PLA then also operating commercial zones for their military. This is referred to as a “strategic strongpoint” concept.

Therefore, it is plausible that the PLA detachment would provide assistance to Pakistani troops in operating the CH-4B. Our independent investigation found no evidence to support this notion, and Pakistani netizens dismissed it as propaganda. Although in light of UAV deployment in the ongoing Russia-Ukraine conflict, Pakistan could have been inspired to adopted combat drones for use against Baloch insurgents. In the wake of the conflict in eastern Europe, drones have proliferated. Bayraktar Akinci and TB2 drones are scheduled for delivery to Pakistan by its ally Turkey.

There are a wide variety of sensor options available on the ALIT/China Aerospace Science and Technology Corporation (CASC)-developed CH-4 multirole MALE UAVs. There are two variants of the CH-4A that are used by China’s PLA: the standard CH-4A, which can fly for 30 hours and is primarily used for reconnaissance, and the strike-capable CH-4B, which can carry a 345 kgs weapon payload but has a flight endurance of 14 hours.

According to reports, the Pakistani Army utilises the CH-4B Strike model. The EurAsian Times reported that Pakistani CH-4 drones were spotted at an airbase close to the Indian border in August 2021. The Bahawalpur airbase in Pakistan’s Punjab province was shown on satellite imagery shared by an open-source intelligence agency. Worldwide, drones have attracted a wide range of customers. The Chinese state-run Global Times claimed a record level of interest for the CH-4 drone on the foreign market just one day before the CH-4B was detected over Balochistan.

The report stated that the manufacturer – the CASC – has shipped more than 200 CH-4 drones to customers abroad. The CH-4 had an 18-metre wingspan, a takeoff weight of 1.3 tonnes, and a payload capacity of 350 kgs. The Lan Jian 7 (Blue Arrow 7) laser-guided air-to-surface missile, the TG100 laser/INS/GPS-guided bomb, and the AR-1/HJ-10 anti-tank missile, also known as the Chinese Hellfire missile, are among the weapons that the UAV is capable of transporting.

It was designed specifically for high-altitude operations over land and sea, and contains a weapon that can be launched from a distance of up to 5,000 metres. The UAV also has a data link to the ground station for control, and a retractable electro-optical sensor turret. According to Popular Science, the CH-4 also boasts a modern, two-person control station that supports both line-of-sight and satellite communications. This Chinese drone is said to resemble the American MQ-9 Reaper by military observers. 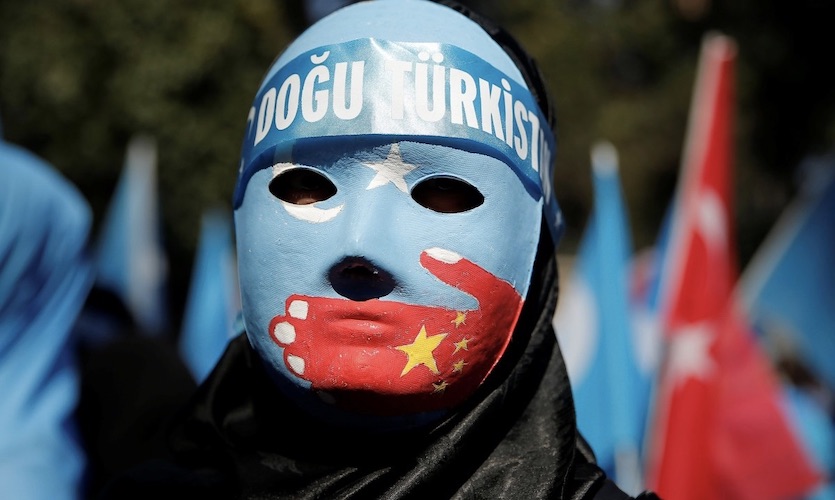