After making its mark in Punjab, the Aam Aadmi Party is approaching the polls in Himachal Pradesh and Gujarat with full force. Can the Arvind Kejriwal-led party really present a much needed third front to the people of India?

Last week, 18 Bharatiya Janata Party (BJP) members in Himachal joined the Aam Aadmi Party (AAP), followed by at least 1000 local party workers. This comes after the Bhagwant Mann faction swept Punjab from the hands of both national parties and all the regional parties with established strongholds.

Last month, the AAP registered a landslide victory in Punjab, winning 92 seats in the 117-member state assembly. While campaigning for the state, AAP national convener Kejriwal promised the people of Punjab a guaranteed round-the-clock power supply, and waiver of domestic electricity bills, if the party is voted to power. “AAP will provide up to 300 units (of) free power in Punjab. 77 to 80 percent people will get zero power bills,” he had said during a visit to Chandigarh. While he had clarified that it would take some time to reach the goal of providing an uninterrupted supply of electricity, the provision of supplying 300 units for free was guaranteed to come into effect immediately after the AAP formed the government.

About a week after taking oath as the chief minister of Punjab, Bhagwant Mann, in his first meeting with Prime Minister Narendra Modi, on March 24, asked the Centre to provide a Rs 1 lakh crore special financial package to the state, to help it become “self-reliant”. “We, the Aam Aadmi Party, are working towards nailing the mafia and filling the coffers of the state. We want that we get a special package of Rs 50,000 crore each for two years so that Punjab can be self-reliant after two years,” he reportedly told the PM. He further added, “I am hopeful that (the) PM will discuss it with the Finance Minister and help Punjab, a state that was at the forefront in the battle of Independence.” Noteworthy, in a serious lapse of the country’s internal security in January this year, the safety of the prime minister was compromised during his visit to Punjab.

The AAP leadership has clarified that it will announce its decision regarding its promise on electricity supply after the first state budget is presented in June 2022. Although it is interesting how the party wishes to make good on its populist schemes and offer freebies to the people of Punjab after asking the Centre for additional funds, whilst pinpointing only the state’s contribution in the freedom struggle.

After the long, drawn out farmers’ protest, largely focused on Punjab and Haryana’s borders shared with Delhi, the people seemed to be in the mood for change in state leadership, which worked tremendously well for the AAP. After wooing farmers with the promise of free electricity for the first 300 units, CM Mann has also demanded that the Centre release the amount of Rs 1082 crores under the additional one percent of Rural Development Fund that is levied by the state for procurement of foodgrains for the central pool. The Punjab state government had said that it would use the additional funds to waive debts of farmers and farm labourers. This comes after the state and its farmer leaders demonstrated against the three farm laws presented by the Centre for a year; laws that the Supreme Court appointed expert committee found that two-thirds of farmers – “the silent majority” – were in favour of.

The AAP also made its mark in Goa, winning 2 seats out of 40 on its first attempt. It registered less than a 0.4 percent vote share in Uttar Pradesh and Uttarakhand, winning no seats. However, the onground momentum the party has gathered, has led it to announce its intention to contest in Karnataka state polls next year, and most likely Telangana and Andhra Pradesh as well.

Like the BJP’s ‘Gujarat model’ that ensured PM Modi’s first Lok Sabha win in 2014, the AAP likes to present its case with the ‘Delhi model’. A Times of India report, published after the party’s second win in 2020, analyses what worked for Kejriwal. The party’s work to upgrade educational infrastructure in the union territory has been at the forefront of its achievements, and its USP. As per its 2020 manifesto, the AAP government added 20,000 classrooms across more that 200 government schools of Delhi, during its first term. Allotting 25 percent of the annual budget to education, the government introduced SMART classes, libraries, desks and laboratories in these schools. Moreover, the AAP government also blocked any kind of arbitrary fee hike in private schools. The list of AAP’s achievements overlooks the 33,000 vacant posts for teachers in government schools, and over 400 vacant posts for principals, as of 2017. This fact was dredged up yet again today, by BJP’s IT Cell head Amit Malviya, in a tweet. This is in addition to the controversy regarding the AAP’s recent claim that its government regularised teaching jobs for 233 Kashmiri Pandits and arranged their pensions. Deputy CM Manish Sisodia claimed in the Delhi Assembly last month, “It also provided Rs 3,000 monthly to Kashmiri Pandit families living in Delhi.” Thereafter, a press release issued by the Kashmiri Pandit Government School Teachers Association read, “We strongly condemn the statement given by the Delhi CM that it was Delhi Government who regularised the services of Kashmiri Migrant Teachers — referred to as KMT here on… Delhi Government was never interested in regularising the services of KMT. In fact, the Delhi Government opposed the regularisation till the very end.”

The government also received some flak for its excise policy that offered liquor shop retailers the option to give wishful discounts. While it had to ban the policy for over a month, it has recently allowed upto a 25 percent rebate or concession. The policy is an assured way to increase revenue, but it is especially problematic as several retail shops are located near religious and educational places.

The Kejriwal administration also provided high subsidies on water and electricity to Delhi’s residents, while also making it free of cost for a certain amount. On August 1, 2019, Kejriwal announced 100 percent subsidy on 200 units of electricity, and approximately 50 percent subsidy on 201-400 units. Additionally, water supply for families consuming up to 20,000 litres of water per month was kept free of cost.

Although his party has been vocally advocating against the so-called ‘Hindutva politics’ of the BJP, Kejriwal hardly seems above it. When Jama Masjid’s Iman Syed Ahmed Bukhari appealed to Muslim voters to vote for the AAP in 2015, a day before polls, Kejriwal had refused the offer saying the party was against any kind of communal politics. Nevertheless, he has, many a time, sported a skull cap at iftar events. A day before Delhi went to polls, in 2020, Kejriwal visited the Hanuman Temple with his family, a few days before which (before the model code of conduct came into effect) he described how reciting the Hanuman Chalisa brings him peace of mind. The AAP head also initiated the Mukhyamantri Teerth Yatra in 2019, under which, senior citizens can travel via five different routes of religious significance by train, for free. It is a potential argument that the leader is secular in the true sense of the word. But is it perhaps possible that he is opportunistic (complete with picture perfect moments) like every other successful politician, making it naïve to say that Kejriwal or his party are “above” communal politics?

The AAP has claimed that the BJP, which is in power in both Himachal Pradesh and Gujarat, is trying to conduct the state polls earlier than scheduled, to avoid losing its voters to the party. In Himachal Pradesh, the migration of BJP leaders has continued, with working and labour class leader Ravinder Singh Ravi, resigning from the party after 40 years, on April 20, to join the AAP with at least 17 of his followers. However, this came after the AAP had to dissolve its state unit following the exit of its top rung leaders, including the party’s state chief Anoop Kesari, state organisational secretary Satish Thakur, Una district chief Iqbal Singh, AAP’s state women’s wing chief Mamta Thakur, women’s wing vice-president Sonia Bindal, Mahila Morcha vice-president Sangeeta, social media wing vice-president Ashish Kumar, and industry wing state president DK Tyagi. The leaders alleged that the party leadership had questioned their intentions, as a result of which, they deserted the AAP to join the BJP.

The AAP is believed to be coming in full force to Gujarat this year. However, a day after Arvind Kejriwal and Bhagwant Mann wrapped up their two-day Gujarat visit, 150 AAP leaders left the party to join the BJP. While the state is a BJP stronghold, a local political strategist, on condition of anonymity, says that the party needs to step up. “Ousting the BJP out of Gujarat remains an impossibility, however, it still needs to be careful given the magnitude at which the AAP is mobilising, and the close call last time. Congress does not present a threat, but if they want to restrict the AAP to Surat, it may be more fruitful to hold the election before November, or even earlier,” they explained.

A local Congress party worker, on condition of anonymity, said, “The Congress will perform well in the tribal belt, since that’s our stronghold. But it does not seem that they want to come to power. The party’s state leadership seems to have gotten too comfortable with the current dynamic.” When asked how the AAP coming to Gujarat with more strength would affect the Congress, they said, “An alliance between the Congress and the AAP is unlikely. The BJP could end up buying some seats from the AAP after results, like it did from the Congress in 2017, to form the single largest party.”

The Kejriwal-led party does seem to be facing uphill battles against the serving BJP governments in Gujarat and Himachal Pradesh, in the upcoming elections. The AAP can certainly be expected to do better than the grand old party, however, it may want to hold off on any alliances given its trajectory toward becoming stronger as a standalone.

India is in desperate need of alternatives to a righteous right, or the loud left. Apart from the obvious above, Kejriwal’s abandonment of Anna Hazare is proof enough that he cannot be prancing around on a high horse. But whether his party can strike a beneficial balance between the two – lucrative for the country and without handicapping the people with freebies – remains to be seen.

Also read: Why The Opposition And The Left Media Need To Abandon RaGa 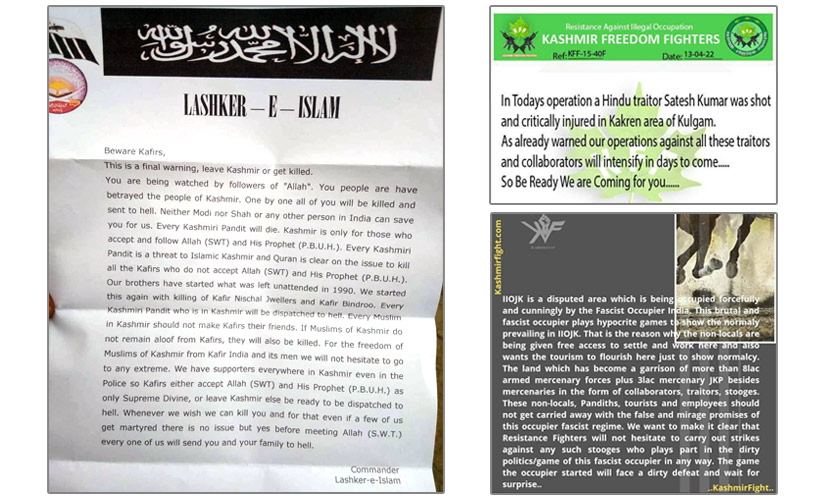