Starting from Kanyakumari today, the ‘Bharat Jodo Yatra’ will cover 12 states and two Union Territories in 150 days, ending in Srinagar with another rally.

Are the stakes for RaGa and the Congress higher than what they would have us believe?

In a fashion unseen lately, Rahul Gandhi flagged off the ‘Bharat Jodo Yatra’ in Tamil Nadu on Wednesday evening, with Chief Minister MK Stalin handing him the Indian national flag. This was done in the presence of the only two remaining Congress head of states in India – Chhattisgarh CM Bhupesh Baghel and Rajasthan CM Ashok Gehlot.

“I am 100 percent sure ‘Bharat Jodo Yatra’ is sanjivani for Congress…it is a life-saver… it will renew the party,” said senior Congress leader and Rajya Sabha MP Jairam Ramesh. “Congress after ‘Bharat Jodo Yatra’ will be a party that cannot be taken for granted either by friends or adversaries,” he added.

Apart from Rahul Gandhi, there are 117 other Congress leaders undertaking the journey, who will be staying in 60 shipping containers that have been modified to accommodate them. As per reports, these containers will be parked in a new place every night, “in the shape of a village”. The extensive list of younger leaders includes Keshav Chandra Yadav, former Youth Congress president; Vaibhav Walia, secretary of the Uttarakhand Congress communication department; Kanhaiya Kumar, former president of the Jawaharlal Nehru University Students’ Union; and Pawan Khera, chairman of the Congress’s media department, among others.

“The Bharat Jodo Yatra is not a speaking yatra… The BJP believes in Bharat todo (divide India).. the Congress believes in Bharat jodo (unite India),” said Jairam Ramesh. During his speech while flagging off the yatra on Wednesday, Rahul Gandhi said, “The RSS-BJP led government is following the old principle of (the) British – divide and rule. Earlier East India Company was doing this and now a handful of businessmen are doing it.”

The Wayanad MP also mentioned, “Today, India faces its worst-ever economic crisis. The highest level of unemployment that we have ever seen and the country is heading into a disaster.” The Congress’ main advertised agenda is to unite the people of India, whom the BJP has tried to divide across religious lines. “It is very important that we bring the people of India together and make sure they are united so that India remains strong. And that is the aim of the Bharat Jodo Yatra which is designed to listen to the people of India,” said Rahul Gandhi.

On Wednesday, Rahul Gandhi started his visit to Tamil Nadu from the Rajiv Gandhi Memorial, paying his respects to his father at the site of his assassination. “I lost my father to the politics of hate and division. I will not lose my beloved country to it too. Love will conquer hate. Hope will defeat fear. Together, we will overcome,” he tweeted after the visit. While heartwarming, this seems to be in line with the Congress’ move to share former PM Jawaharlal Nehru’s picture holding a tricolour, in response to the BJP’s ‘Har Ghar Tiranga’ campaign last month.

Building on the success of past leaders’ portfolios and popularity seems like the Congress’ last Hail Mary attempt to break its fall from grace. After the exit of senior party leader Ghulam Nabi Azad, who labelled RaGa as an unfit politician and a “non-serious” leader, among other things, the Congress legacy potentially requires a thorough image cleanse or a resounding tragedy to steer it back on course, even though heeding the advice of senior leaders may be less expensive. The yatra publicity has also taken away the heat the Gandhis have been facing from the Enforcement Directorate (ED).

Another inference to draw from this activity could be to see how it works for them in the state assembly elections in Gujarat and Himachal Pradesh later this year, and prepare for 2024 accordingly. Although undoubtedly, it will be interesting to see if Rahul Gandhi can spin the narrative in his favour like his grandmother and former PM Indira Gandhi, chalking up the G23 fiasco, the high profile exits and the ED investigation to a conspiracy only to malign him, his party, and the people of India. But as columnist Vir Sanghvi puts it: “G23 isn’t a 1969 moment for Congress and Rahul Gandhi is no Indira.”

Notably, out of all senior leaders still willing to be associated with the Congress, CM Gehlot is the only one who has shown overwhelming support for Rahul Gandhi. While Jairam Ramesh continues to do his due diligence and perform his duties unto the party, his support for the Gandhi legacies has been too short of the enthusiasm he carried otherwise, at least until 2019.

The Congress has seen a problematic time after the landslide loss of the 2019 Lok Sabha election, with the advent of the G23 in August 2020. Kapil Sibal and Ghulam Nabi Azad have been the most high-profile exits this year, along with other senior and Youth Congress leaders leaving in unprecedented numbers. Gujarat Youth Congress president Vishwanathsinh Vaghela is the latest to leave the party, less than three months before the state assembly election.

Add to this, the dearth of talking points. Contrary to what Rahul Gandhi may have been told, India is the best-performing as the entire world faces an economic crisis in the post-COVID world. Inflation, which is the main area of concern for all given how all countries revolve around the whims of the US Fed, has not even featured in the red-letter list for India. Amidst the global recession, McKinsey CEO Bob Sternfels has comfortably estimated, “Many people have said that it’s India’s decade. I actually think it’s India’s century.”

Rahul Gandhi and the Congress at large could definitely stand to do some homework when talking about employment. Not only do they fail to account for COVID, which pushed India’s unemployment rate to 8 percent, they also fail to mention how it was reduced to 5.98 percent in 2021. For all its faults, this government’s Atmanirbhar Bharat mission has worked wonders to make this happen. As of July 2022, India registered 72,993 startups over the past six years, creating at least 7.68 lakh jobs. Moreover, Rahul Gandhi’s favourite scapegoat Mukesh Ambani’s Reliance Industries created 2.32 lakh jobs in the last fiscal (2021-22) alone.

When the BJP says that the party should focus on ‘Congress Jodo’ instead of the arduous yatra, however begrudging the sentiment behind the suggestion, it has a point. Regional parties have gradually moved away from the perpetual Congress-led left of centre opposition, making the UPA obsolete. The energetic mobilisation of problematic but grassroots leaders such as Nitish Kumar and Mamata Banerjee’s forces, not unlike Prime Minister Modi’s himself, definitely helps us comprehend more clearly which way the power could shift, be it in 2024 or 2029. While a power shift is inevitable and also necessary, it presents a greater threat to the existence of the Congress.

If the larger left functions ably enough, and defeats the BJP to successfully make a government without the Congress, can the grand old party really remain afloat?

Also read: Could Allowing Non-Locals To Vote In Kashmir Be A Presumptuous Move?

Also read: Why The Opposition And The Left Media Need To Abandon RaGa 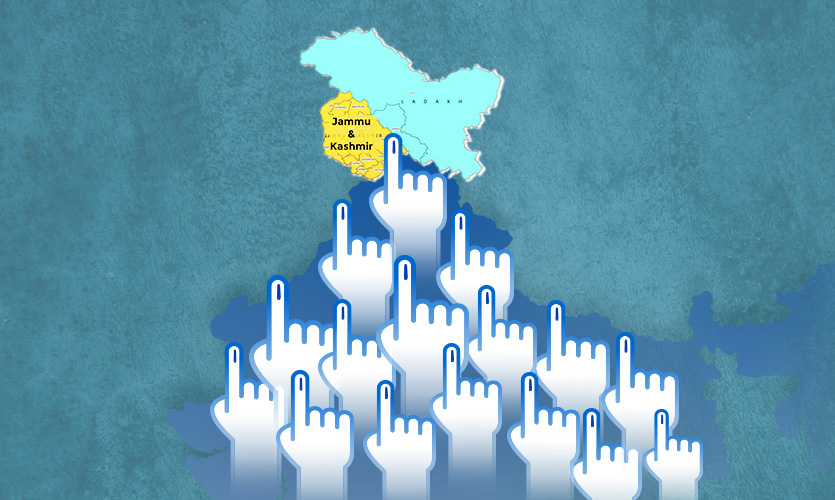 Could Allowing Non-Locals To Vote In Kashmir Be A Presumptuous Move?